Hello! Hope everyone’s having a Fabulous Friday! It’s FREEZING here in Boston but oh so festive. The gas lampposts in my neighborhood are all decked out and I can’t wait to share images (when I get a chance to snap snap).

Anyhow, as promised THE day has come! Brittany Fischer, my colleague and Beauty Editor of Gloss48 will contribute to LZM with a series called, Boys According to Brit. Here’s the first of many more to come…

The first thing I’ve come to understand about the male species is that they are the exact opposite of me. They might not be the opposite of YOU, because you might be one of those chill girls who likes sports and chilidogs and thoroughly enjoys a nice long game of golf, but they are most definitely the opposite of me.  I am the girliest of girly girls, and was once even called “awkwardly feminine” by an evil classmate (whatever). I now play with makeup for a living. I enjoy being a girl.

My boyfriend and I are nothing alike. We are opposite in our levels of appreciation for the game of football (mine is zero), our taste in movies (I like rom-coms, he likes action), and our desires to spend Saturdays lifting weights at the gym (uh—no thanks). We’re also opposites when it comes to eating.

I am a girl who constantly has food on the mind, tries to eat as little as possible, but still ends up eating a whole lot. My boyfriend does things like forget to eat. Forget . . . to eat? It’s a concept that I cannot grasp. Whenever he comes home ravenous because he hasn’t eaten all day, I think of this quote from Bridget Jones’ Diary.

“I realized that I have spent so many years being on a diet that the idea that you might actually need calories to survive has been completely wiped out of my conscious-ness. Have reached point where believe nutritional ideal is to eat nothing at all, and that the only reason people eat is because they are so greedy they cannot stop themselves from breaking out and ruining their diets.”

But don’t get me wrong, he loves food. When presented with a menu, he will undoubtedly order the richest, meatiest, most decadent option, without even thinking twice. But that’s not all—he also devotes one whole day a week purely to food. It’s called Fatboy Sunday. On Fatboy Sunday, you can eat absolutely anything you please, and you can eat as much of it as your fat little heart desires.

I have to say, it’s kind of glorious. I now celebrate Fatboy Sunday, too, and surprisingly, I’ve found that it actually helps me eat better for the rest of the week. Knowing that in just a few days I can make something hot and cheesy and saucy and sinful, it’s relatively easy to eat salads for lunch all week.

Here are the six most epic things I’ve ever made on Fatboy Sunday. If you are trying to seduce a fellow, there’s really no need for La Perla, fancy perfume, and a smoky eye, as pop culture might have you believing. Nope. Let’s get real: all you need to do is invite him over on a Sunday, turn on “the game,” and make one of these bad boys. Bonus? I am not a culinary genius by any stretch of the imagination, so they are all quite cinchy to make.

This decadent Mexican mac n’ cheese is anything but bland. It’s from my favorite recipe blog, Domesticate Me, and it is super hearty and includes beans, corns, sausage, and lots of peppers. Jon said it was the best thing he’s ever eaten in his entire life. He spent the entire day sleeping, waking up only to eat a huge bowl of this cheesy goodness. By the end of the day he had eaten around 10 bowls. I doubled and tripled some of the veggies–so feel free to customize it to your own liking. Beware, though, you will enter a serious food coma after noshing on this heavenly, heavenly grub.

When I make anything vegetarian, Jon unfailingly stares at it, perplexed, and asks, “Where’s the meat?” This spicy Jambalaya contains chicken, shrimp, AND sausage, so he can’t get enough of it. When he makes a lot of sounds, I know it’s a home run, and he was VERY vocal about this one. (source) 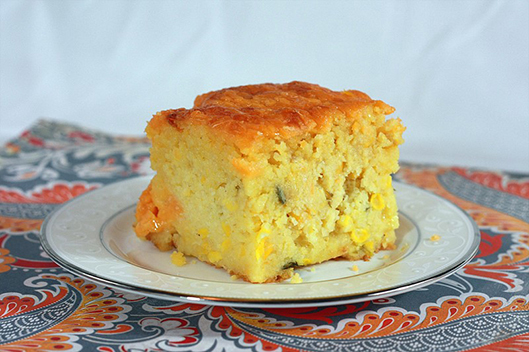 I am a soup lover, but Jon is not. It’s not satisfying enough for him. So, whenever I make soup, I make this cornbread with it so he doesn’t complain. And he does NOT complain–he rejoices! It is easily the most delicious bread I’ve ever had the pleasure of eating. It’s so so so moist, and it’s got chunks of corn and sour cream in it, so . . . yeah. I am literally salivating as I write this. Go make it. Now. Your life will never be the same. (source) 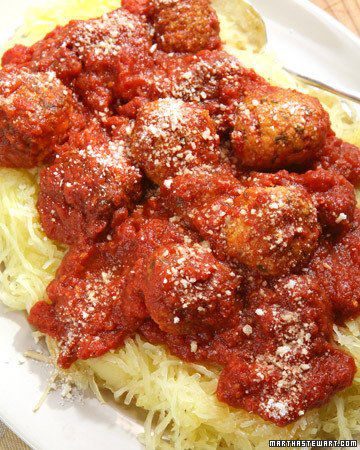 This spaghetti squash with turkey meatballs from Martha Stewart is OOC: Out. Of. CONTROL! Jon didn’t even realize that he was eating squash, not noodles. Once he did, he remarked that he actually liked squash better because the shorts strands were easier to eat. No twirling necessary. The best part? Spaghetti squash has like, no calories and tons of nutrients, so I don’t even feel guilty dousing it in sauce and cheese. It’s wondrous, especially on a chilly winter night with a big ol’ glass of Chianti.

Sometimes I will wake up in the morning and find an empty jar of peanut butter on the kitchen counter. Why? Because Jon eats peanut butter in his sleep. He’ll often roll over and murmur things like, “Do we have any peanut butter?” or “Can I have some peanut butter?” in the middle of the night. He is a serious, serious peanut butter lover. This Reese’s peanut butter cup pie capitalizes on everything that is good about Reese’s cups AND everything that’s good about cookie dough. It is the guiltiest of guilty pleasures. I actually brought leftovers into work, to give to Kellie and her unborn baby, but the entire Gloss48 team ended up digging in. It’s salty, sweet, doughy, and delicious. It makes being bad feel so, so good. (source) 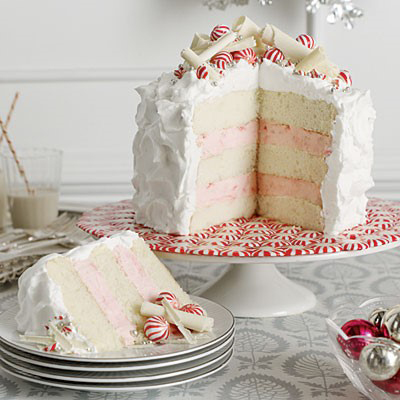 Yeah. You better believe I made this. It was for Jon’s birthday, and he loves cheesecake more than he loves me. Seriously. If he had to choose, I’m fairly certain he would choose cheesecake. I didn’t make the peppermint plate–so sue me. I’m a human, I’m not Barefoot Frickin’ Contessa. But the cheesecake layers were so insanely yummy with the vanilla cake, and I added chunks of white chocolate. Jon and I ate this entire cake in like 3 days, and he did most of the work. He actually ate so much of it that he made himself sick each night, and at the end he concluded that he must be “allergic” to cheesecake. No, Jon, you aren’t allergic–anyone who eats 5000+ calories of it would get sick! But seriously, this might be the best dessert ever. It takes time, but it’s worth every single second . . . and calorie! (source)

Intense 5pm sunlight illuminating our kitchen & husband making dinner. Grateful for these little moments. #lezoemusingshome #dinnertime #cooking
Mood:happy and bright. Weather is gorgeous as well! #blooms #sunnydays
Misty & magical. The beauty of nature. #newengland #beach #capecod #heavenonearth
Need to make this again, soon. Spinach, arugula, avocado, blueberries & roasted cauliflower. I wouldn’t consider myself a really (really) healthy eater but I could appreciate salads as much as fried chicken. Everything in moderation. #lezoemusingseats #salads #cleaneating
More than a healthcare hero. He’s our everything. #husband #daddy
She made it so special for us. A sweet (& tiny) anniversary celebration. More on stories.. #lezoemusingskids #floraldesign #madewithlove
%d bloggers like this: